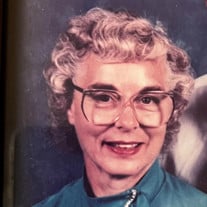 Virginia LaRalph Tidwell July 9, 1929 ~ December 10, 2021 Virginia L. Tidwell passed away Friday, December 10th, 2021, at her residence in Delta, Colorado, of natural causes. She was 92 years old. Services will be held at the Delta Garnet Mesa Baptist Church at 2:00 p.m. Saturday, December 18, 2021, and graveside to follow at Eckert Cemetery in Eckert, Colorado. Virginia L. Tidwell was born on July 9th, 1929, to Lois Mae (Muck) and John Ralph Albert on a farm south of Glen Elder, Kansas. She was the oldest of nine children. She attended the Lone Hill Country Grade School. She attended the Glen Elder High School graduating with the class of 1947. Virginia was baptized as a teenager, along with her brother John in the Christian Church at Glen Elder, Kansas. In 1951, she graduated from Manhattan Bible College and later obtained her Masters Degree at the University of Northern Colorado. Virginia met Robert J. Tidwell while they were attending Bible College and then on July 9th, 1951, they were married at the Christian Church in Glen Elder. To their union, five children were born. They celebrated 62 years together. She taught for many years in the Denver Public school system (Lincoln High, Kennedy High and Lake Jr. High). Virginia was born and raised in Kansas, and after marrying the young man from Colorado, the foothills and mountains of Colorado became her home. Even after losing her husband in October of 2013, she remained in Colorado. Virginia was an “Outdoors” person and saw value in everything. She loved nature, her animals, gardening and especially her fruit trees and flowers. She was very much involved in the care of their ranch near Cedaredge, CO. Her lively personality enabled her to connect with everyone she met. Friendships were a priority and she maintained lasting relationships throughout her life. She remained very close to her brothers and sisters. Virginia’s deep faith in God helped her get through the difficult days as her health was failing. She weaved her spiritual value into her daily life and frequently expressed it to her family. Virginia is survived by her children Marcia Tidwell of Laramie, WY; Steven Tidwell of Bailey, CO; Sharon Tidwell of Delta, CO; Mark (and Holly) Tidwell of Pagosa Springs, CO; and Allan (and Karen) Tidwell of Bradenton, FL. Also Surviving are grandsons Austin Tidwell, Jamie Tidwell, and Jakin Tidwell (and wife Jamie); granddaughter Dr. Jasmine Tidwell (and husband Amiel Leal-Chen), as well as two great-grandsons. Also Surviving are brothers John of Larned, KS; Ron (and Nena) of Victoria, KS; sisters Darlene Lyne (Clayton) of Lincoln, KS; and Carolyn Lyne (Merlin) of Beverly, KS; sister-in-law Nadine Albert of Plainville, KS; Judy Albert of Beloit, KS; and Sylvia Hooper of Fort Worth, TX; and a host of nieces and nephews. Virginia was preceded in death by her parents, her husband, brothers Tom, Max, Charles and Kendall; brother-in-law Roy Tidwell and sisters-in law Marlene Albert and Marilynn Albert. Memorial contributions may be made to the Garnet Mesa Baptist church or Touch of Care Hospice. Arrangements are under the care and direction of Taylor Funeral Service and Crematory. View the internet obituary and sign the online guest registry at: www.taylorfuneralservice.com

The family of Virginia LaRalph Tidwell created this Life Tributes page to make it easy to share your memories.

Send flowers to the Tidwell family.