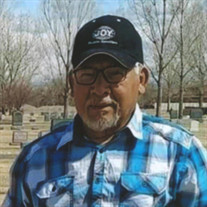 Vidal Aldaba Lozano January 25, 1951 ~ January 3, 2022 Vidal Aldaba Lozano passed away Monday, January 3rd, 2022, at his residence in Paonia, CO. He was 70 years old. Services will be held at the Assembly of God Church in Paonia, CO on Saturday, January 8th, 2022, at 2:00 p.m. Vidal was born on January 25th, 1951, to Antonia Aldaba and Pedro Velasquez in Durango Mexico. He grew up in the Gomez-Palcio Durango Mexico area. Vidal completed his education through college in Mexico. He graduated from Paonia High School in 1972. Vidal has been a resident of the Paonia area for nearly 50 years. After a brief eight-hour engagement Vidal married the love of his life on January 30th, 1987, to Brandy Sue Harper. Vidal’s chosen career was in the coal mines. He spent 42 years mining. In his free time, he was part of the Elks Lodge of Hotchkiss and served as a Chaplin. He was part of the “UMWA” United Mine Workers of America. Vidal was an avid outdoorsman, who enjoyed shooting, hunting, fishing, camping, gardening and reloading ammunition. He collected firearms and the “Joy Stickers” from mining equipment. Above all, he loved his family and enjoyed these activities even more with them. He loved to smoke on the BBQ, often with a Corona or a Bud Light in hand. He often reminded family “Lozano’s don’t quit or give up!” Vidal is survived by his loving wife Brandy Sue Lozano of Paonia, CO; his six sons: Christopher (Tiffany) Lozano of Menifee, CA, Anthony (Robyn) Lozano of Crawford, CO, Michael Lozano of Paonia, CO, Alex Lozano of Grand Junction, CO, David Lozano of Grand Junction, CO, and Carlos Lozano of Ft. Carson, CO; two daughters: Gina (Jeremy) Byers of Foley, AL, Shannon (Jake) Peterson of Hotchkiss, CO; four brothers: Maricio, Martin, Weto, and Antonio; three sisters: Romona, Martha, Maria-Louisa and Chevella; ten grandchildren, and two great-grandchild and numerous nieces and nephews. Vidal is preceded in death by his parents, one great grandchild, Grandma and Grandpa Martinez. Arrangements are under the care and direction of Taylor Funeral Service and Crematory. View the internet obituary and sign the online guest registry at: www.taylorfuneralservice.com

The family of Vidal Aldaba Lozano created this Life Tributes page to make it easy to share your memories.

Send flowers to the Lozano family.