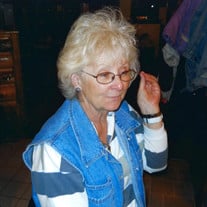 Vickey L. Spencer, 69 of Delta, Colorado, passed away peacefully, surrounded by family on Saturday, October 30, 2021 at HopeWest Hospice, Grand Junction, Colorado. Vickey was born December 2, 1951, in Delta, Colorado. She was the daughter of Eugene and Billie (Schull) Huffington. Vickey grew up in Delta and graduated from Delta High School in 1970. Vickey was co-founder of a successful waste management company, Roberts Enterprises, in which she managed the day-to-day operations from bookkeeping to driving a truck picking up waste with the guys. While managing her business, Vickey was also employed full-time by North Fork Medical Clinic in Paonia for over 30 years, where her loving smile and attitude helped to make patients feel better. Vickey married Larry Spencer on November 17th, 1994, at Mountain View Bible Church in Lazear. During their nearly 27 years of marriage, they spent a considerable amount of time camping and shopping for antiques. Vickey loved her time outdoors and any time spent with family. Vickey was a member of numerous bowling, softball, volleyball leagues and a member of the Paonia Booster Club. She was preceded in death by her parents, a brother Larry, Aunt Madge and Uncle Wally. Vickey is survived by her son Shawn (Lorizza) Roberts of Paonia, a daughter Nichole (Kevin) Long of Paonia, a step-son Troy (Lorie) Spencer of Hotchkiss, a brother Rick (Deborah) Huffington of Delta, a sister Jan (Sky) Connoyer of Lynchberg, TN. Vickey was blessed with 12 grandchildren and 4 great-children which brought her much joy. Internment will be at Riverside Cemetery, Hotchkiss, at a later date. Memorial contributions can be made in Vickey’s name to HopeWest Hospice.

The family of Vickey L. Spencer created this Life Tributes page to make it easy to share your memories.

Send flowers to the Spencer family.