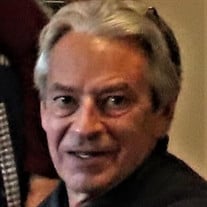 Cedaredge, Colorado resident, Stephen Kirk Mullen, passed away on Sunday, May 16, 2021 at his residence. He was 69 years of age. As per Stephen’s wishes, no formal services will be held. Stephen was born on December 10, 1951 to Allen H. and Margaret Louise (Fieke) Mullen in Susanville, California. He spent his early childhood in California until the family moved to northern Virginia where Stephen graduated from W. T. Woodson high school. Not long after after commencing his studies at Virginia Tech the family moved to Lakewood Colorado and he followed to Boulder Colorado where he received his Bachelor’s Degree from the University of Colorado. Stephen married Suzanne Zavarro and helped raised her son as his own. Following a career in sales he spent a number of years caring for a friend and his wife during their time of need; here again he helped raise his friend’s daughter as his own. 2009 found Stephen moving to Cedaredge to help care for his parents. He loved living life and helping others especially his neighbors on NE 4th Street in Cedaredge. Stephen is survived by his wife’s son, Mark Zavarro of Florida; two brothers: Tom (Cathy) Mullen of Delta and John (Liz) Mullen of Breckenridge; and two nieces, six grandnieces and one grandnephew; significant other Teri Gray, of Cedaredge along with his many friends on N.E. 4th Street and in Cedaredge. Stephen was preceded in death by his parents and his wife, Suzanne Zavarro.

Cedaredge, Colorado resident, Stephen Kirk Mullen, passed away on Sunday, May 16, 2021 at his residence. He was 69 years of age. As per Stephen&#8217;s wishes, no formal services will be held. Stephen was born on December 10,... View Obituary & Service Information

The family of Stephen K. Mullen created this Life Tributes page to make it easy to share your memories.

Send flowers to the Mullen family.