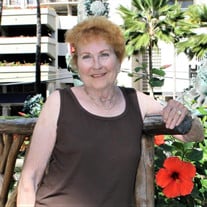 Shirley Joan Harvey, 84, of Eckert, Colorado, passed away peacefully at home on April 22, 2020 surrounded by loved ones. Shirley was the youngest of three children born to James Daniel and Ethel Eileen (Myers) Culver. She was born in Kamay, Texas on November 5, 1935, but spent most of her life living in California and Colorado. Shirley married Earl Gamboni at a fairly early age. Although the marriage ultimately ended in divorce, they were blesses with 4 wonderful children: LaVista, Lonny, Reno, and Maria. She was then blessed with another son, Phil Prince. Shirley then married Fred Harvey on April 28, 1966 in Reno, Nevada. They were blessed with yet another daughter, Melanie, and an adopted granddaughter, Shannon. Although she had one adopted child, and 6 natural born children, she was a mother figure to many, many more. Her doors were always open, and she loved them all unconditionally. While living in California, Shirley worked as a waitress at a few high-end restaurants. She had the privilege of serving several famous singers, and was well known for her outstanding memory, as she never wrote down an order. She and her husband, Fred, also enjoyed raising animals on their "hobby farm" in Eckert, Colorado. They raised miniature horses and donkeys, pygmy goats, llamas, along with any other animal that their kids brought home. Shirley is survived by her children LaVista Romero, Lonny (Diane) Gamboni, Maria Gamboni-Ortega, Melanie (Kevin) Cooper, along with several grandchildren, great-grandchildren, and nieces and nephews. She is preceded in death by her parents; her husband, Fred; her sister, Viola; her brother, Howard; her son, Phil; her son, Reno; and two grandchildren. A celebration of life for this incredibly loved lady will be announced and held at a later date. The family would like to express their heartfelt thanks for the outpouring of love, support and prayers during this time of loss

Shirley Joan Harvey, 84, of Eckert, Colorado, passed away peacefully at home on April 22, 2020 surrounded by loved ones. Shirley was the youngest of three children born to James Daniel and Ethel Eileen (Myers) Culver. She was born in Kamay,... View Obituary & Service Information

The family of Shirley J Harvey created this Life Tributes page to make it easy to share your memories.

Send flowers to the Harvey family.