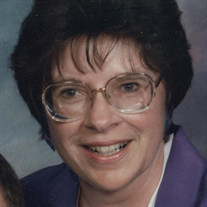 Sharon Johnson was born February 21st, 1951, to Elizabeth and Stanley Sudol in Deerfield New York. She spent her childhood there, developing a love for land and family, working on the Sudol dairy farm with her brothers Dick and Ronnie, and sister Susan. After high school she attended Utica School of Commerce, and embarked on a career in travel, first as a reservations consultant, and then as agency manager. Travel remained a constant in Sharon’s life, and she explored Europe, Mexico, Alaska, Hawaii, and most of the continental USA. She married Duane Johnson July 29th, 1978, and she became stepmom to his children Tracy and Tyler. His job moved them to multiple Midwestern states, before locating in Arvada Colorado. When they retired in 1997, they settled for good in Cedaredge. There, Sharon stayed active, golfing with the ladies groups, camping, snowmobiling, riding ATV’s, taking everyone’s money at Texas Hold Em, and playing cards with the girls. The past few years were spent at their cabin on the Grand Mesa with their dog Piper, and watching their grandson play sports. Sharon was a valued member of the All Saints Lutheran Church, and served as treasurer for several years. She was preceded in death by her parents, Stan and Betty, a brother in law, Douglas Roome, and several beloved fur babies, Buttons, Sammy, Abby, and Zoey. She is survived by her husband, Duane, brothers Richard (Carol) Sudol, Ronald Sudol, sister Susan Roome, stepchildren Tracy (Bob) Stoddard and their son Charlie, Tyler (Janet) Johnson and their son Tucker, as well as multiple nieces and nephews. Through her years battling cancer, Sharon never lost her positive attitude, and stayed strong for her loved ones. Though she is gone, and will be greatly missed, we know this kind woman rests in heaven with her Lord and Savior Jesus. A Celebration of Life service will be held at 11:00 a.m., Saturday, April 10, 2021 at All Saints Lutheran Church in Cory, Colorado. In lieu of flowers, the family suggests memorial contributions to be made in Sharon’s memory to All Saints Lutheran Church, 20101 Deer Creek Road, Austin, Colorado 81410 or to HopeWest Hospice, PO Box 24, Delta, Colorado 81416.

Sharon Johnson was born February 21st, 1951, to Elizabeth and Stanley Sudol in Deerfield New York. She spent her childhood there, developing a love for land and family, working on the Sudol dairy farm with her brothers Dick and Ronnie,... View Obituary & Service Information

The family of Sharon M. Johnson created this Life Tributes page to make it easy to share your memories.

Send flowers to the Johnson family.