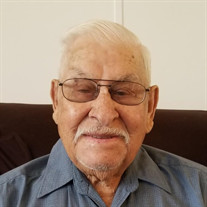 Not sure what to send?

Salomon Eduvijen Montoya October 17, 1930 ~ April 7, 2022 Salomon Eduvijen Montoya past away at Delta Health Hospital on April 7th, 2022 at the age of 91. Salomon was born October 17th, 1930 in La Puebla New Mexico to Felicita Martinez and Melecendro Antonio Montoya. Salomon grew up in La Puebla. He joined the Air Force at the young age of 16 (1946). He would remain in the Air Force until January of 1953. It was that very same month he would marry the love of his life, Adella Yersenia Padilla. They were married for 60 years until her death in March of 2013. To this beautiful union they had 9 children. Six boys; Charles and wife Erma (deceased) of Delta Colorado, Gerald(deceased) and wife Theresa of Las Vegas, Nevada, Andy of Colorado Springs, Colorado, Gilbert and wife Diana of San Tan Valley, Arizona, Dennis (deceased) and wife Peni of Maricopa, Arizona and Jesse (deceased) of Paonia, Colorado and three daughters; Barbara and husband Patrick Murphy of Montrose, Colorado, Theresa and husband Allen Snider of Hotchkiss, Colorado and Phyllis and husband PJ Pene of Hotchkiss, Colorado. Salomon is survived by one sister, Carmen Vigil of Espanola, New Mexico, three sons, three daughters, 23 grandchildren, 31 great grandchildren and Eight great great grandchildren. Salomon was active in the Elks Club, American Legion and the local VFW. He would spend his working days in the mining, construction and carpentry fields. Salomon lived for 50 years in the Paonia, Colorado area and the last five years in Hotchkiss, Colorado. He enjoyed camping and hunting, but his true passion was working in the garden with his family. Salomon loved to gamble. He enjoyed his trips to Las Vegas and playing cards with family. He was a true FAMILY MAN! Salomon was preceded in death by his parents, his wife, three brothers, eight sisters and three sons. Visitation will be held at the Taylor Funeral Services Chapel, Tuesday, May 17th from 1:00pm – 2:00pm. Rosary to immediately follow at 2:00pm. Mass will be held, Wednesday, May 18th at 11:00am at the Immaculate Heart of Mary Catholic Church in Grand Junction, Colorado (790 26 ½ Road). A graveside service will follow at the Veterans Memorial Cemetery of Western Colorado at 1:00pm. Arrangements are under the care and direction of Taylor Funeral Service and Crematory. View the internet obituary and sign the online guest registry at taylorfuneralservice.com

The family of Salomon Eduvijen Montoya created this Life Tributes page to make it easy to share your memories.