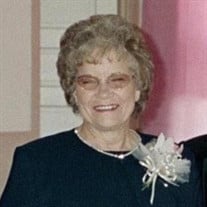 Rosena May Smith passed away Friday, October 15th, 2021 at Delta Health Hospital in Delta, Colorado. She was 86 years old. Services will be held 2:00 p.m. Saturday, October 23rd, 2021, at Taylor Funeral Service’s Chapel in Delta, Colorado. Family internment at Pea Green Cemetery. Rosena was born on January 17th, 1935, to Thelma (Province) and Fred Morlang in Olathe, Colorado. She grew up in Olathe and graduated from Olathe High School in 1953. On March 19th, 1954, Rosena married the love of her life Conn E. Smith in Olathe, Colorado. They celebrated 67 years of marriage together. In the early years of marriage, Rosena and her mother-in-law sold eggs and milk to contribute to the finances of the family. Later, Rosena worked as a bookkeeper for the Olathe Potato Growers before becoming the Pea Green/Delta Avon lady. In 1978, Rosena started her career in real estate, and she became a leading realtor in the Delta area for many years, serving as an original member of the board of realtors for Delta County. Rose retired from real estate in 2008, after a successful career and recognition as the Realtor of the Year in 1987. Later, when Conn Ed retired from farming, Rose and Conn Ed spent winters in Quartzite, AZ where they made many new friends and connected with old friends and family. Rose was an active part of her community, where she participated in the Pea Green Ladies, as well as Pinochle and Bridge groups. Her favorite activity was spending time with family, and her many grandchildren and great-grandchildren were the center of her attention. Rose and Conn Ed greatly enjoyed trips to Lake Powell, often bringing their family, particularly their grandchildren, to join the fun. Rose also loved the holidays, especially Christmas, and was happiest when her kitchen was crowded, and her house was full of family. Throughout her life, Rose was an avid collector of bells, frog figurines, and dolls. Rosena is survived by her loving husband Conn E Smith of Delta, CO; her two sons Kirk (Janet) Smith of Delta, and John Smith of Grand Junction, CO; her daughter-in-law Rhonda (Dennis) of Montrose, CO; her sister Phyllis Keehfuss of Montrose, CO; six grandchildren and six great-grandchildren. Rosena is preceded in death by her parents; her brother Romeo Morlang; her son Mark Smith; her grandson Joey Smith, and her great-granddaughter Grace. Memorial contributions can be made in her name Hope West Hospice: 195 Stafford Ln, Delta, CO 81416; Delta, CO 81416; (970) 874-6823 Arrangements are under the care and direction of Taylor Funeral Service and Crematory. View the internet obituary and sign the online guest registry at: www.taylorfuneralservice.com

The family of Rosena May Smith created this Life Tributes page to make it easy to share your memories.

Send flowers to the Smith family.