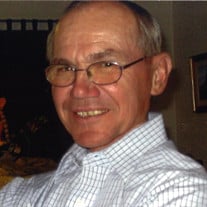 Robert William Teal passed away Thursday, April 15, 2021, at his residence in Delta, Colorado. He was 75 years old. A celebration of life service will be held on Friday, May 7, 2021; at 10:00 a.m. at Grace Community Church, 300 Stafford Lane Delta, Colorado. The Service will also be available on livestream and archive: https://vimeo.com/539321242 Robert will be laid to rest at the Veterans Memorial Cemetery of Western Colorado. Robert was born on October 25, 1945, to Doris Irene (Zorb) and Alfred Robert Teal in Saint John, Washington. Robert graduated High School at Wa-Hi, Washington in 1965 and graduated from Walla Walla Community in 1967. Robert enlisted in the Navy on September 19, 1967, and served our country till May 14, 1973; this is where he got the nick name “baby duck”. September 29, 1973, in Walla Walla, Washington, Robert married the love of his life Deborah Marlene (Rule) Teal. They celebrated 47 years together! They had two sons, Gregory R. and Kevin D. The family made their way to Colorado in 1990. Robert’s chosen career was a sawmill owner and truck driver. Robert Loved spending time with his family! He especially enjoyed spending time fishing, hunting, four-wheeling and many road trips! He was a member of Grace Community Church of Delta. Robert is survived by his loving wife Deborah Marlene Teal, his sons Gregory (Jodi) Teal and Kevin (Sarah) Teal, his mother Doris Irene Teal, his brother Alfred Lee “SPIKE” Teal (Debbie), sisters Barbara Knopp (Russ), LeRae Templeton (Steve), seven grandchildren and two great-grandchildren. Robert was preceded in death by his father Alfred Robert Teal. Memorial contributions may be sent to Hope West Hospice in Robert’s name to 195 Stafford Ln, Delta, Colorado 81416. Arrangements are under the care and direction of Taylor Funeral Service and Crematory. View the internet obituary and sign the online guest registry at taylorfuneralservice.com

The family of Robert William Teal created this Life Tributes page to make it easy to share your memories.

Send flowers to the Teal family.