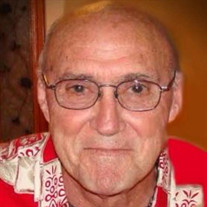 Ralph E. Peck, March 28, 1933- April 17, 2021. Ralph died at home on April 17, 2021, joining his loving wife, Neysa G. Hess in the spirit world. Ralph passed away enjoying his beloved view of Mount Lamborn, The West Elk Mountains, and all of God’s Little Creatures. Ralph was born to Zada Louise and Sidney Earl Peck in Omega, Oklahoma. He received a B.S. at Panhandle State University, an M.A. at Central State University in Edmond, Oklahoma, and later a Specialist Degree in Education from Colorado State University. Ralph was a natural-born athlete who excelled in basketball, baseball, tennis, and golf. He enjoyed painting, drawing, science fiction (Star Trek), antiques, and his model train collection he began at age 12. Ralph was interested in his family history and origins. He enjoyed wildlife of all types and loved the mountains. Ralph’s children recall fond memories of camping, 4-wheel driving, snowmobiling, and traveling while growing up. He was full of energy and loved life. An educator at heart, Ralph began his career as a teacher and was later appointed principal of the Olathe Elementary & Jr. High School. Until his retirement, Ralph served as Supervisor of Special Services in the Montrose School District. His kindness and compassion were apparent to those around him as he was a lifelong caregiver for many people in his life. His compassion made a difference and inspired many people he came into contact with. His strong family orientation and sense of obligation led him to lend a helping hand wherever and whenever he could. Ralph’s logical and methodical approach to life combined with a brilliant mind and sense of humor offered purposeful and wise advice to many in his later years. Ralph was happily married to Neysa Hess for 20+ years. Ralph and Neysa shared countless wonderful adventures before her passing in 2003. Prior to that he was married for 10 years to Juanita Gillis. His first love, Donna Cook and he shared 23 years of marriage and three wonderful children, Mark, Scott, and Kellie. Ralph is survived by his children, Mark Peck (Ricarda), Scott Peck (Kelly Sue), Kellie Spadafora (Randy), and step-daughter, LaVonne Gorsuch (Jeff Kelley). He loved his family and enjoyed all of his grandchildren: Cameron Spadafora, Kelsey Spadafora, Kevin Peck, Cristine Peck, MyKel Peck, McKensie Peck, Brandon Peck, Bryan(Misty) Peck, Brent Peck, and Lauren Gorsuch and his great-grandchildren: Sophia and Connor Peck. Per Ralph’s request there will be no services.

The family of Ralph E. Peck created this Life Tributes page to make it easy to share your memories.

Send flowers to the Peck family.