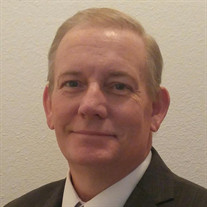 Paul Allen Crockett July 29, 1959 ~ January 12, 2022 Paul Allen Crockett went home to be with the Lord on Wednesday, January 12th, 2022, at his residence in Colorado after a long, valiant battle with numerous health issues. Paul was born to Davy Paul and Sandra Mae (Glasscock) Crockett in St. Joseph, Missouri. Paul was 7th generation to the historical Davy Crockett. A graduate from DeKalb High School in Missouri in 1977, Paul continued his education at Missouri Western State College in St. Joseph, receiving his bachelor’s degree in Architecture in 1981. He then moved to Colorado where he resided until his death. On August 14, 1985, Paul married his first wife, Sherry Lynn Krispin. As a result, three wonderful children were born: Amanda Shaylyn, Ian Cameron and Sierra Emily. Paul was an entrepreneur at heart. He built a highly successful die-cutting/foil-stamping business, traveling to Japan, Korea and many U.S. cities. He was instrumental in the design and production of the first holographic image. Later in life and divorced, the determined man we all knew Paul to be resulted in him tapping into his many talents to make a new living for himself and his children. He chose to go into construction as an owner/operator and took on a Wick Buildings’ dealership. It was through this endeavor that he met his to-be second wife, Wendy Sue Breunig and they were wed on July 30, 2008, in Ridgway, Colorado. Together, Paul & Wendy helped found the Marriage Ministry Outreach team at Crossroads Church in Thornton, CO, and there they developed and conducted their “Marriage Tune-Up” classes, reaching numerous couples and singles. In 2017, they moved to Western Colorado and began facilitation of these classes at First Baptist Church of Delta, CO. Paul loved his 3 children, their spouses and grandson immensely. He loved including them and spending time with them in the various activities he so enjoyed: working on old Ford vehicles, dirt biking, motocross, camping, target shooting and especially 4-wheel driving in remote and difficult mountain terrain. Paul is survived by his devoted wife Wendy; son Ian (Taylor Dushane) Crockett; daughter Sierra (Dustin) Cowan; grandson Cameron James Crockett; mother Sandy Crockett; sister Denise (Gerry) Threatt; several nieces and nephews and many other relatives. Paul was preceded in death by his father Davy (1985) and his daughter Amanda (2019). Paul’s dying request was to be cremated without services. The family would like to thank all the incredibly caring staff at Black Canyon DaVita Dialysis Center (too many to mention), HopeWest Hospice (Misty, RN), River Valley Family Health Center (Dr. Jesus Ochoa and Daniel Swain, PA), Delta Health Physical Rehabilitation (Stacie Ochoa, PT), Cedaredge Chiropractic (Dr. Vincent Wood), and Delta Health Radiology (RN’s Mindy, Glenda and Shawna) for their expert and personalized care. Many thanks also go out to the numerous additional medical professionals, family members and friends who have lightened Paul’s path through this very difficult journey. To Pastor James Conley and all of Paul & Wendy's church family members: your prayers, encouragement, caretaking and concern have been invaluable. Our family is blessed beyond measure. Thank you all. Arrangements are under the care and direction of Taylor Funeral Service and Crematory. View the internet obituary and sign the online guest registry at: www.taylorfuneralservice.com

Paul Allen Crockett July 29, 1959 ~ January 12, 2022 Paul Allen Crockett went home to be with the Lord on Wednesday, January 12th, 2022, at his residence in Colorado after a long, valiant battle with numerous health issues. Paul was... View Obituary & Service Information

The family of Paul Allen Crockett created this Life Tributes page to make it easy to share your memories.

Send flowers to the Crockett family.