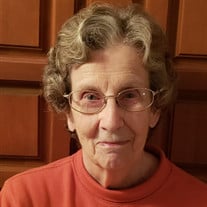 Myrtle Elaine (Durrant) Fry, age 86, of Eckert, Colorado, formerly of Osawatomie, Kansas died Tuesday, February 09, 2021. Elaine was born April 24, 1934 in Osawatomie, Kansas. She was the daughter of Auburn B. and Myrtle Irene (Pontious) Durrant. She grew up in Osawatomie and graduated from Osawatomie High School with the Class of 1952. She then attended Wichita Business College and worked for Cessna as a Keypunch Operator. She was united in marriage to Charles Randolph Fry, Jr. on April 4, 1953 in Osawatomie, Kansas. They made their home in Pratt, Kansas and became the parents of three children. During the children’s school years, the family lived in Greenburg, KS., Beaver, OK., and Brighton, CO. Elaine was active in Boy Scouts, Girl Scouts, Eastern Star, and the Methodist Church. In 1977 she re-entered the work force and retired in 1994 from working for Adams County in Brighton, CO. She enjoyed watching her grandchildren growing up. In 1999 she moved to Missouri to be with Irene and John Dollar. Those years were such a joy to her. When they moved to Florida she moved to Eckert, CO to live by her daughter. She was active in the Eckert Presbyterian Church activities and served as a Deacon. She was preceded in death by her parents, an infant brother Darrell, her brother Maurice in 2000, her twin sister Irene in 2007, and a grandson James in 2009. Survivors include two sons, Charles William Fry and wife Sandy of Brighton, CO; Randall Dean Fry and wife Tammie of Dumas, TX; and one daughter Penny Lou Hagel and husband Mike of Eckert, CO; 8 grandchildren and 11 great grandchildren. Graveside service will be in Osawatomie Kansas Cemetery on April 24, 2021 at 11:00 am with a luncheon after to visit with the family.

The family of Myrtle Elaine (Durrant) Fry created this Life Tributes page to make it easy to share your memories.