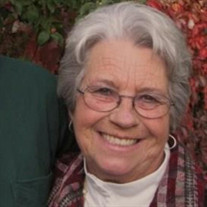 Myra “Evonne” Carpenter January 10, 1939 ~ February 14, 2022 Myra Evonne Wright was born January 10, 1939, in Bakersfield, California to Lee & Lucille Hibbert Wright. She was the oldest of four children and having three younger brothers, learned early in life how to have fun, be mischievous, stand up for herself, nurture others & be a little spit fire. As a small child her family would move back & forth between Oklahoma & California eventually settling in Oklahoma where she would graduate from Ponca City High School in 1957. As a graduation gift the family decided to take a trip to California. While traveling thru Gunnison CO. on their return trip, the car broke down. Needing extra money for repairs she found work at the Jointed Rod resort located on the Gunnison River as a housekeeper. Also working there as a carpenter was a good-looking cowboy named Sonny. Once they saw one another, it was love at first sight! Sonny didn't waste any time in capturing her attention and affection and they were married on Dec. 7th 1957. Needless to say, Evonne never made it back to Oklahoma. In June of 1960 they welcomed their daughter Lynn and in May of 1964 their daughter Denise. Sonny and Evonne were adventurous, fun loving, hardworking, God-fearing people that never knew a stranger, had a large circle of friends and others they considered family. Over their life time they would open their home to others & because of this unselfish gift were blessed with "extended family". Around 1990 they left Gunnison moving to Leuders, Texas where they worked for the Hendrick Home for Children as house parents for disadvantaged kids. It was their dream job & also resulted in lifelong friendships & adventures! Circumstances deemed they move back to Colorado in 1994 to care for Evonne's parents that were living in Delta. Here they would stay for the remainder of their lives. Once again making many friends and having many adventures. Evonne was a, devoted wife, mother, aunt, sister-in-law and friend to those fortunate to know her. Evonne & Sonny loved the outdoors ,dancing, spending time with family & friends, serving in church as a Deacon's wife, Sunday School teacher and being involved in the Oddfellow & Rebekkah organization holding many different offices over the years. She was a talented, homemaker, seamstress, cook, and gifted at crocheting. She loved unconditionally, forgave easily and often and sacrificed for those she loved. She taught by example and shared her love and belief in Christ with those that wanted to learn and know about him. It's because of this, that we're comforted knowing one day we'll be reunited. Evonne passed away quite suddenly on Feb.14th 2022 in Delta, CO. from complications of Congestive Heart Failure. Interment will be in Gunnison, CO. later this year. Surviving Evonne are her daughter & son in law Lynn & Don Cadrin and cherished extended family. She was preceded in death by her husband Sonny, daughter Denise, parents, brothers Arnold, Larry & Wayne Wright & brother-in-law Jack Carpenter. Arrangements are under the care and direction of Taylor Funeral Service and Crematory. View the internet obituary and sign the online guest registry at: www.taylorfuneralservice.com

The family of Myra "Evonne" Carpenter created this Life Tributes page to make it easy to share your memories.

Send flowers to the Carpenter family.