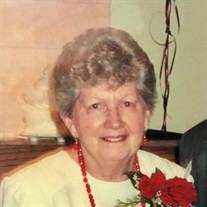 Merna Rae Pope died January 4th, 2021, at Horizons Care Center in Eckert. She was 87 years old. Funeral services will be held at 10:00am, Saturday, January 16th, 2021, at Taylor Funeral Service’s Chapel followed by graveside service at Mesa View Cemetery in Delta. Merna was born March 15th, 1933 to John H. and LaVara (George) Connaway in Vona, CO. At the age of five, they moved to the Delta area. She graduated from Delta High School. On June 3rd, 1951 she married the love of her life John R. Pope-“Johnny Bob”. They celebrated 67 years of marriage. Merna was a homemaker/housewife and she served the United Methodist Church as a secretary for 20+ years. She was part of the Sweet Adelines and a member of the Community of Christ of Delta. She is survived by her children, Glenn (Lisa) Pope of Peshtigo, WI, Roy (Jo) Pope of Delta, CO, Naoma Heaps of Grand Junction, CO, Cheryl (GW) King of Delta, CO, daughter-in-law Elizabeth Dill of Burneyville, OK along with 19 grandchildren, 23 great-grandchildren and 2 great-great-grandchildren. She was preceded in death by her husband John Pope; her parents, brother John F. (Buck) Connoway, daughter and son-in-law Carrie and Ed Montoya, and a son Wayne Pope. Memorial contributions may be sent to: Volunteers of America – c/o Roy Pope, 534 Peach Lane, Delta, CO 81416. Arrangements are under the care and direction of Taylor Funeral Service and Crematory. View the internet obituary and sign the online guest registry at taylorfuneralservice.com

The family of Merna Rae Pope created this Life Tributes page to make it easy to share your memories.

Send flowers to the Pope family.