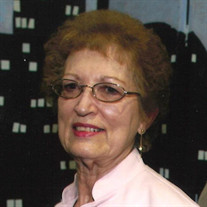 Marleen L. Gall died on Wednesday, December 2, 2020 at the Delta County Memorial Hospital in Delta. She was 80 years old. An honors service will be held on what would have been Marleen’s 81st birthday, Thursday, August 5, 2021 at the Taylor Funeral Service Chapel in Delta, CO. Burial has taken place at the Mesa View Cemetery in Delta, CO. Marleen was born on August 5, 1940, in Oklahoma City, OK, to Marvin Lee and Fern Kathleen (Lewis) Crain. Marleen spent her childhood in Oklahoma City, received her education there, and graduated as valedictorian of her senior class in 1958. On July 8, 1960 she wed James M. Gall in Oklahoma City. On July 8 of this year Marleen and James celebrated 60 years of marriage. She spent 2 years at Midwest Christian College in Oklahoma City, 2 years at Dodge City Community College in Dodge City, Kansas and then graduated from Fort Hays State in Kansas in 1980 receiving her master’s degree. Marleen was an educator, specifically teaching children at the elementary school level. Marleen had been a resident of Paonia for the last 40 years, coming from LaCrosse, Kansas. Her husband James, being a minister, meant she had belonged to several different Christian Churches over the years. Marleen was a reserve member of Delta Kappa Gamma, and a founding member of Phi Delta Kappa, where she had also served as first Vice-President of the Mesa State Chapter. Her interests included plants, travel, and she had an extensive collection of bells. She is survived by her husband, James Gall of Paonia; a son, Vince L. and Donna Gall of Evergreen; grandson Alexander James Gall and brother, Robert Lee Crain of Oklahoma City. Marleen was preceded in death by her parents. Memorial contributions in Marleen’s name can be made to the Sjogrens Foundation or an area charity of one’s choice. Arrangements are under the care and direction of Taylor Funeral Service and Crematory. View the internet obituary and sign the online guest registry at taylorfuneralservice.com

Marleen L. Gall died on Wednesday, December 2, 2020 at the Delta County Memorial Hospital in Delta. She was 80 years old. An honors service will be held on what would have been Marleen&#8217;s 81st birthday, Thursday, August 5, 2021... View Obituary & Service Information

The family of Marleen L. Gall created this Life Tributes page to make it easy to share your memories.

Send flowers to the Gall family.