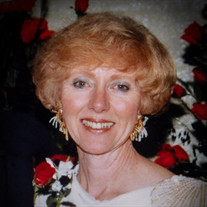 Marilyn Evelyn Spear March 3, 1938 ~ March 30, 2022 Marilyn died on March 30, 2022, following a months-long illness. She was born to Merle and Evelyn (Swanson) Morgan on March 3, 1938, in Denver, Colorado, where she grew up and graduated from South High School. Soon after graduation, she went to work at Ringsby Trucklines where she met her future husband, Robert. They were married on July 12, 1958, and enjoyed 63 wonderful years together. In 1972, Marilyn and Robert moved their family from Morrison, Colorado, to Delta in their quest to raise their three children, Cindy, Russell, and David, in a rural setting far away from the ‘rat race’ of big-city life. She held a variety of jobs to help meet the family’s needs, including many years at the drivers licensing office in Delta where she was known for her happy disposition in caring for customers’ needs. It was a job that suited her lifelong and sincere interest in meeting and assisting people. Marilyn was particularly enthusiastic about her Bible-based beliefs as one of Jehovah’s Witnesses, devoting much of her time to teaching others about God’s promises of a better future for the Earth and mankind. Her firm faith gave her the strength to endure hardships and disappointments, particularly the tragic loss of her daughter and father in a car accident in 1975. A true extrovert, she felt most content when in the company of family and friends -- and a good cup of coffee. While she had a variety of interests including scrapbooking, learning to play the harp, painting, and sewing, her interests were always more about the relationships that they helped foster. It was people who energized her spirit and filled her life with happiness. Marilyn is survived by her husband, two sons, Russell, and wife Barbara, and David, and wife Shelby. She is also survived by five grandchildren (Morgan, Madison, Sophie, Kentson, and April) and five great grandchildren (Atticus, Simza, Vivian, and Nicholas). A memorial service in loving acknowledgment of a friend and of a life well-lived will be held on Saturday, April 16, at 1:30 p.m. via Zoom. Arrangements are under the care and direction of Taylor Funeral Service and Crematory. View the internet obituary and sign the online guest registry at: www.taylorfuneralservice.com

The family of Marilyn Evelyn Spear created this Life Tributes page to make it easy to share your memories.

Send flowers to the Spear family.