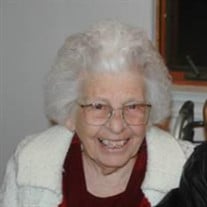 Lucille Alice Wick Phippeny June 17, 1918 – February 3, 2021 Lucille Wick Phippeny died at her home in Naturita, Colorado on February 3, 2021, as a natural consequence of a long life. She was more than 102.5 years old at the time of her death. Lucille was born on June 17, 1918, in Hunter, Kansas to Andy Wick and Hilda Jepson Wick. She was the middle of five children and moved with her family at an early age to the Western Slope of Colorado, where her father owned the Eckert Store for a short time before going into full-time farming. She attended school in Eckert and graduated from Western State College in Gunnison with a degree in Elementary Education. Lucille married Paul Bruce Phippeny on August 30, 1940, and they raised their three children on the Phippeny family farm in Eckert. They were active in the Eckert Presbyterian church and Colorado Farm Bureau, and as an avid gardener Lucille raised and preserved enough food to feed her family throughout the year. Lucille was a substitute teacher and eventually took a permanent position in Delta where she taught for 16 years at the Lincoln Elementary school. In 1978 Lucille and Bruce purchased a farm in the Paradox Valley, Colorado, with their son Dale and his family. At an age when most people retire, she took on the responsibility of home-schooling her Paradox grandchildren and further contributed by cooking noon meals for the whole family. She and Bruce enjoyed camping and fishing and shared their time and love of the outdoors with all of their grandchildren, leaving them with fond memories of childhood outings. Lucille is survived by her son-in-law Phil Walter of Newcastle, CO, daughter Karen Leonard (Jerry) of Grand Junction, CO, son Dale Phippeny (Ruth) of Naturita, CO, and by seven grandchildren and six great grandchildren. She is also survived by one brother Louis Wick (Joyce) of Delta, CO. She was preceded in death by her husband Bruce, her parents, two sisters, one brother, and her oldest daughter Joan. Lucille was cremated and will be laid to rest beside her husband of 74 years in Eckert, CO, with graveside services to be held at a later date. Memorial contributions may be made to the Nucla Naturita Senior Citizens Center, PO Box 232, Nucla, CO 81424. Arrangements are under the care and direction of Taylor Funeral Service and Crematory. View the internet obituary and sign the online guest registry at taylorfuneralservice.com.

The family of Lucille Alice Wick Phippeny created this Life Tributes page to make it easy to share your memories.

Send flowers to the Phippeny family.