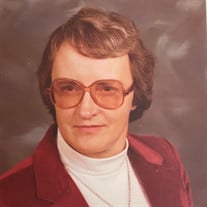 Lois Norine Kenney was born March 30, 1929, to John Willis Kenney and Ruth Anne Warren Kenney. A member of two pioneering families who homesteaded before Colorado was a state, Lois spent her early years in Rangely and Meeker with her parents, her sister Doris and surrounded by grandparents, aunts, uncles and cousins. Lois attended primary school in Glenwood Springs, CO, and the remaining public school years in LaPorte and Estes Park, CO, while living on State Game and Fish units. She graduated from Estes Park High School and was involved in many activities, including band. She was a young woman who was progressive for her time. She attended Blair Business College in Colorado Springs and returned to Carbondale to work where she met and married Fred Robinson, Jr. Together they had three children and moved the family to Grand Junction in 1956. Lois then began work at the VA Hospital as an assistant to the Chief of Medicine, later worked for the County Court system as a clerk, and ultimately finished her career as a trust officer at US Bank. She was recognized many times for her professional capabilities and was a member of several professional societies. After retirement she lived in the Grand Junction area raising race horses with her husband M.E. “Slim” Hedges. She then moved closer to town to find new adventures in life spending time with her children and grandchildren. Throughout her life she always exhibited bravery and fortitude. Lois enjoyed her free time in various ways including: hunting, fishing, skiing, sailing, caring for elderly family members, and watching her kids, grandkids and great-grandkids succeed in their own adventures. Throughout her life, she was the matriarch who prioritized her family above all else. Lois has joined her ancestors: parents Ruth (Warren) and Willis Kenney, grandparents Austena (Banta) and John Kenney and Emma (Terrell) and George Warren, sister Doris (Kenney) and Kaye Donne Ferguson, nephew John Ferguson, and many aunts and uncles. She is preceded in death by her husbands. She is survived by her children Donna Robinson of Rangely, CO; Dan (Jerri) Robinson of Hotchkiss, CO; Debra Robinson of Indian Hills, CO - grandchildren Shannon Robinson, Levi (Maria) Robinson, Jeremy (Julie) Meade, Seth Robinson, Danielle (Dusty) Carson, Christian Feagans – ten great grandchildren – nephew Tom (Cindy) Ferguson – and many other friends and family who treasure her. Her legacy of love and compassion will live on through the younger generations she leaves behind. The family extends their deepest gratitude to the staff at Crossroads Delta for providing compassionate care for the past several years and to HopeWest for offering her comfort and care in her final days. In lieu of flowers, we ask that you consider a donation in Lois’ memory to HopeWest at www.hopewestco.org/memorial-gifts or by contacting them directly. Send cards to Debra Robinson at Box 602 Indian Hills, CO 80454. Graveside service will be held on Saturday, September 4, 2021, at 1:30 p.m. at the Evergreen Cemetery in Carbondale, Colorado. Arrangements are under the care and direction of Taylor Funeral Service and Crematory. View the internet obituary and sign the online guest registry at www.taylorfuneralservice.com

Lois Norine Kenney was born March 30, 1929, to John Willis Kenney and Ruth Anne Warren Kenney. A member of two pioneering families who homesteaded before Colorado was a state, Lois spent her early years in Rangely and Meeker with her... View Obituary & Service Information

The family of Lois Norine Kenney Robinson-Hedges created this Life Tributes page to make it easy to share your memories.

Send flowers to the Robinson-Hedges family.