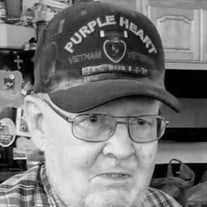 Longtime Hotchkiss, Colorado resident, John C. Cotten, passed away peacefully surrounded by his loving daughters on Monday, November 16, 2020 at his residence. He was 75 years of age. John Clayton was born on May 5, 1945 to Orval (Jack) Aven and Elva Lee (Drake) Cotten in Hotchkiss, Colorado. He spent his early childhood in Maher then the family moved to Gunnison where John graduated from Gunnison High School with the Class of 1965. After graduation, John worked on the Blue Mesa and Morrow Point Dams until he was drafted into the United States Army serving in the Vietnam War. During the war he was injured and received the Purple Heart. After being discharged John returned home and received his associate degree from Mesa State College. He then moved his family to the North Fork Valley and worked as a coal miner until his retirement. John married Cynthia Ann Miller on May 2, 1968 in Gunnison. To this union, four daughters were born. John was a member of Lynch/Cotten American Legion Post 190 and the Hotchkiss Elks Lodge. He loved horses and being outdoors especially camping. He also loved guns and saddles. John is survived by his wife, Cynthia Cotten of Minnesota; three daughters: Ginger Redden of Hotchkiss; Roxi Cotten of Minnesota and Kodi Cotten of Arizona; three brothers: Orval (Shirley) Cotten of Crawford; Gene (Nora) Cotten of Delta and David (Sherry) Cotten of Hotchkiss; a sister, Lois Cotten of Hotchkiss; three grandsons; and five great-grandchildren with one on the way. John was preceded in death by his parents, Orval (Jack) and Elva Cotten; an infant daughter, Valerie Cotten; a brother, James Cotten; and a sister, Katherine Cotten.

Longtime Hotchkiss, Colorado resident, John C. Cotten, passed away peacefully surrounded by his loving daughters on Monday, November 16, 2020 at his residence. He was 75 years of age. John Clayton was born on May 5, 1945 to Orval... View Obituary & Service Information

The family of John C. Cotten created this Life Tributes page to make it easy to share your memories.

Send flowers to the Cotten family.