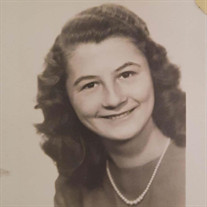 Joan Anne Beers passed away on Wed., January 27, 2021 at her home in Cedaredge. Joan was 89 years old. Mrs. Beers’ funeral service will take place on Friday, Feb. 5, 2021, at 1:00 p.m. at the Bible Center Church in Paonia with John Owen officiating. Interment will be in the Cedar Hill Cemetery in Paonia. Joan Anne Perrault was born on November 4, 1930 in Methuen, Mass. to Anna and Donat Perrault. She spent her childhood and received her schooling in the elementary and high school in Methuen, graduating high school with honors in 1948. She received her nursing degree from Massachusetts General Hospital in 1951. On Nov. 17 of that same year she wed Ronald W. Beers in Methuen. Together they raised three children. Joan was a nurse, homemaker, church organist, a pianist and a seamstress. She and her husband, Ronald spent 31 years in Paonia before relocating to Cedaredge less than a year ago. They were members of the Bible Center Church in Paonia. In addition to being survived by her husband Ronald of Cedaredge, she is survived by a son, Richard Beers of Paonia, a daughter, Karen Evan Cobble of Eckert, a sister Beverly Catalano of New Castle, OH, as well as 6 grandchildren and 13 great grandchildren. Preceding Joan in death was son Ronald Paul Beers, and 2 brothers: Donald and Paul Perrault. Contributions in Joan’s memory can be made to the Christian Mission in Many Lands (CMML), P.O. Box 13, Spring Lake, NJ 07762. Arrangements are under the care and direction of Taylor Funeral Service and Crematory. View the internet obituary and sign the online guest registry at taylorfuneralservice.com

The family of Joan Anne Beers created this Life Tributes page to make it easy to share your memories.

Send flowers to the Beers family.