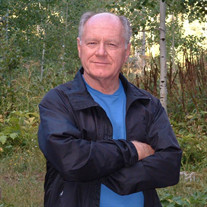 James “Sandy” Charles Albertson, was born July 31, 1940 in Newburgh, NY. He passed away April 22, 2020 at his home in Cedaredge, CO. He was 79. You knew him as Jim, Jimmy, or Sandy. Sandy became “the man of the house” at the age of 19 when his stepfather died. He worked and helped raise his brother Rex and his sister Kim, then 6 and 7 years old. In fact, he has had many jobs because of layoffs, but each time he would get up and go get another job to provide for his family. One of his favorite jobs was as a parts man for Ford dealerships in the Hudson Valley of New York. He had that job for many years and he could still remember the part numbers for Ford car parts and would rattle them off at parties. A horseman for 40 years, Sandy found time to ride his Appaloosa horse and practice for grueling hundred-mile endurance rides. He loved that horse and still watched movies of him years after the horse was gone. When Sandy had a broken back, he prepared himself for surgery and kept his spirits up during recovery, though not without help from you, his friends. After Sandy suffered a collapsed lung, recovery for him was extremely difficult and frustrating. He had to start at the beginning physically, rebuilding his lost stamina and lung capacity. But he kept at it because Sandy was steadfast. Sandy was an assistant coach with the CU Speed Skating club for 15 years. He was present for thousands of dry land and skating workouts, helping new skaters improve their skills and giving the seasoned skaters a run for their money. Sandy was a beautiful skater and he was a joy to watch on the ice. Many winters were spent carpooling to Keystone and Calgary for speed skating practice and events. Sandy was generous – If you owned something with the Pearl izumi mark on it, chances are Sandy had given it to you. In fact, he earned the nickname “Sandy Claus,” because he gave away uncounted pieces of clothing when he worked for Pearl izumi. Sandy was always willing to try a new activity, but motorcycling, snowshoeing, bicycling, camping and speed skating took up most of his free time. Sandy wanted his friends to join him in the pursuit of this fun. Who has not been urged to try something new? Who has not heard the “You should get a motorcycle” speech? Sandy’s last job was driving cars for Longmont Ford. He loved the challenge of driving different cars and especially liked to drive long distances. He formed a close bond with the other men who shared the driving with him and missed them terribly when he moved to the Western Slope. Through all the tests life handed Sandy, financial, medical, family, he remained steadfast, generous and fun loving. He also maintained a friendly, youthful demeanor. That made him special. He is survived by his brother Rex, his sister Kim, and his wife, Susan. No services will be held at this time.

The family of James "Sandy" Charles Albertson created this Life Tributes page to make it easy to share your memories.

Send flowers to the Albertson family.