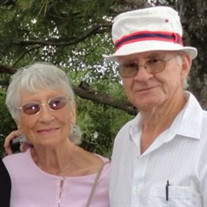 Hillard “Hal” Buchanan, passed away peacefully on Saturday, February 20, 2021, at Aspen Ridge Alzheimer's Special Care Center in Grand Junction, CO. He was 85 years old. The youngest of 12 children, Hal was born on December 5, 1935, to Bessie (Johnson) and Walter Buchanan in Sophia, WV. He attended schools in Beckley, WV and La Porte, IN. Hal served in the U.S. Army from January 1954 to December 1955 as a Bridge Specialist (Specialist third class) in the 58th Engineer Company stationed in Korea and Japan. After he was honorably discharged from the Army, he returned home and became a house painter. On September 2, 1961, he married Naomi Lou (Dolph) in Denver, CO. Naomi, better known to all the family as “Babe,” and Hal met while working at Shwayder Brothers Sampsonite Luggage. They had three daughters, Sue (Waller) from Naomi’s previous marriage, Robin, and Paula. Hal worked for many years as a foreman at Rocky Mountain Bank Note until 1973 when the family moved to Delta. They owned and operated the Econo-Wash Laundry Mat for three years. Hal then went into business for himself as a handyman, painter, and home remodeler. Dubbed “the original flipper,” one of his passions was buying fixer-uppers to renovate and sell. Over the years, he and Naomi bought and sold numerous properties in Denver and Delta. He loved working with his hands and could fix just about anything. He enjoyed hunting, fishing, camping, gardening, working on cars, playing guitar, restoring tractors, and spending time with his family. Hal and Naomi resided in Delta until her passing in 2019. He is survived by daughters Sue Scott (Steve), Robin Lacy (Dave), and Paula Channel (John), eight grandchildren, 18 great-grandchildren, and many nieces and nephews. He was preceded in death by his parents, six sisters and five brothers, and his loving wife, Naomi “Babe” of 58 years. Hal’s family wishes to thank Aspen Ridge Alzheimer’s Special Care Center and Hope West Hospice for the kind and loving care they provided him. In lieu of flowers, memorial donations may be made to Hope West Hospice of Grand Junction. Arrangements are under the care and direction of Taylor Funeral Service and Crematory. View the internet obituary and sign the online guest registry at taylorfuneralservice.com.

The family of Mr. Hillard "Hal" Buchanan created this Life Tributes page to make it easy to share your memories.

Send flowers to the Buchanan family.