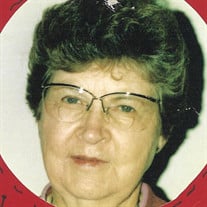 Hazel McLeod Fitti passed away on Friday, October 9, 2020 at her daughter’s home in Hotchkiss, CO. She was 92 years old. A memorial service to honor the life of Mrs. Fitti will take place at 11:00 am on Saturday, November 14, 2020 at the Hotchkiss Elks Lodge. Officiants will be her son, Tom McLeod and Art Wolverton. Born on Nov. 8, 1927 in Paonia, Colo. to Charlie and Mary (Hurley) Childress, Hazel spent her childhood at Maher, Crawford and Crystal Creek. Hazel attended Western State College in Gunnison, where she was on the figure skating team. Hazel married John A. McLeod at Crawford in 1948. Together they had a son and a daughter. The marriage later ended in divorce. In addition to residing in the North Fork area of W. Colorado, Hazel resided for a few short years in Denver, and also in Lansdale, Penn. On November 16, 1991 Hazel became the wife of Nicholas S. Fitti in Lansdale, PA. Mr. Fitti passed away on March 22, 2016. Hazel was a Catholic, but later in life she attended St. Luke’s Episcopal Church. She was a former member of the local, state and national Cowbelles (now called Cattleman’s Assoc.), she was a member of the Maher Onion Valley Club, and the Crawford and Paonia PTA Association. Her varied interests included riding horses, all outdoor activities, bird watching and painting pieces of art work. She was a dedicated volunteer and was very involved in the American Red Cross Blood Service. Mrs. Fitti is survived by son, Tom McLeod of Crawford; daughter Barbara Palmer, of Hotchkiss; as well as 4 grandchildren, and 7 great grandchildren. Her parents preceded her in death, as well as her brother, Pat Childress; two sisters: Irene Hitchcock, and Mary Ann Crews. Memorial contributions can be made in Hazel’s name to HopeWest Hospice P.O. Box 24, Delta, CO 81416. Arrangements are under the care and direction of Taylor Funeral Service and Crematory. View the internet obituary and sign the online guest registry at taylorfuneralservice.com

The family of Hazel McLeod Fitti created this Life Tributes page to make it easy to share your memories.

Send flowers to the Fitti family.