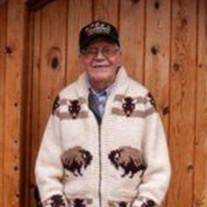 Gerald Lee Pearson, known by his friends and family as “Jerry,” passed away peacefully in his sleep on January 24, 2022. Jerry, an only child, was born in Leadville, Colorado on April 6, 1933 to Oscar Alder Pearson and Delia Marie (Holmstrum) Pearson. Jerry loved telling stories of the shenanigans he and his cousins got into while growing up in Leadville. His cousins were like brothers and sisters to him, and he maintained deep friendships with them throughout his lifetime. Jerry, who always had a knack for whistling a happy tune, was a natural musician, and started playing trumpet in Leadville’s high school band when he was only in the 6th grade. His love of lively music continued and grew into a lifetime hobby of Polka dancing. In 1952, Jerry graduated from Leadville High School. Shortly afterward he was drafted into the U.S. Army, where he faithfully served his country during the Korean War. He was honorably discharged on September 14, 1956. Jerry was very proud of the service he gave to his country and enjoyed telling stories of his time in Korea. In 2014, Jerry’s niece Kerry McFarland arranged for Jerry, along with other Colorado veterans, to go on an Honor Flight to Washington, DC to see the war memorials. Jerry was quick to thank other veterans for their service, and he always appreciated a “thank you for your service” from a gracious stranger. Though Jerry no longer served in the U.S. Armed Forces, the conviction to serve his fellow man stayed with him for the rest of his life. Not only was Jerry quick to lend a helping hand wherever he went, but he made it a habit to serve his local community of Hotchkiss, Colorado as a lifelong member of the Hotchkiss B.P.O. Elks. He also served eight years as a Hotchkiss city councilman. On September 20, 1958, Jerry married the love of his life, Patricia (Pat) Trevethan Pearson in Leadville, CO. The couple quickly started a family…Harold (Hank), Delia, Lynn, and Eric. To support his family, Jerry started a new career with the U.S. Fish and Wildlife Service, which lasted 38 years. This job took the family to Creede, Colorado and then eventually to Hotchkiss, Colorado where Jerry would live happily for the rest of his life. Jerry was known to “love the Western Slope of Colorado,” and he never considered leaving his new home. Never one to sit still, Jerry quickly started a new job as a school bus driver after his official retirement from the U.S. Fish and Wildlife Service. For 15 years Jerry safely took busloads of children over the icy mountain passes of Colorado to ballgames, picked them up for school, and safely returned them home every evening. Jerry loved getting to know all of the students! Even though Jerry was a dedicated, timely, and hardworking man, Jerry truly lived his life to the fullest and was always up for having fun and pursuing his hobbies. Jerry was an avid outdoorsman and conservationist. He loved to hunt elk and enjoyed taking his sons, grandsons, sons-in-law, brothers-in-law, nephews, friends, and strangers to his hunting camp on top of Grand Mesa. In fact, he never missed an elk hunting season…he even made it up to hunt in 2021 at the age of 88! A hunt with Jerry was one to be remembered, and he made everyone feel at home at his massive hunting camp. As much as Jerry enjoyed hunting with the guys, he equally enjoyed spending time with his wife, Pat, fishing for trout on the many lakes of Colorado. The couple especially enjoyed spending time at Lake Miramonte, and they made sure to take all of their kids, grandkids, and family to this special lake. Jerry loved to travel the world, eat new foods, and especially meet new people. The man truly never met a stranger, and a “short walk” around the neighborhood would quickly turn into a long reunion of sorts. Jerry also effortlessly made friends with all the dogs he encountered. As much as Jerry loved to have fun, he loved his family more, especially Pat, his wife of 63 years. Pat and Jerry exemplified devotion to one another. They worked side by side, and they had fun side by side. Jerry loved that Pat learned to make all of his favorite Swedish foods, such as spritz and Swedish pancakes. The couple traveled extensively both nationally and internationally. They often included their grandchildren in their travels. Though the couple lived far from most of their kids and grandkids, they made sure to attend all weddings, graduations, and major life celebrations, in addition to yearly visits to see their grandchildren. The couple made sure the grandkids attended hunter’s safety, had a fishing pole and tackle box, had plenty of opportunities to fish, hunt, camp, travel, and have fun. They never forgot a birthday or special event. They were truly devoted and loving grandparents. Jerry’s greatest legacy is revealed in his four children. He taught each of them to work hard, to play hard, to serve their fellow man, to be optimistic, to be friendly, and to enjoy life. He loved each of them deeply and was very proud of them. Jerry was preceded in death by his parents, grandparents, aunts, uncles, some cousins, and one brother-in-law, and his parents-in-law. He is survived by his wife, Pat Pearson of Hotchkiss, Colorado, son Harold/Hank (Henriette) Pearson of Portales, New Mexico, daughter Delia (Phil) Kaiser of Mesa, Arizona, son Lynn (Brandi) Pearson of Manila, Utah, and son Eric Pearson of Phoenix, Arizona, grandchildren Hannah, Seth, Thaddeus, Abby, Jessica, Felicia, Matthew, Kyra, Tyson, and Keaton, and 14 great-grandchildren, sisters-in-law Phyllis (Dolph) Koroshetz, Paula McFarland, and Rita (Nicole Rose) Trevethan, numerous nieces and nephews, and many friends. No formal service will be held at this time. Please help Jerry’s family and friends honor his legacy by practicing the following life lessons taught by Jerry: live to the fullest, get to know a stranger, thank a veteran, serve your fellow man, pet a lonely dog, and make memories with the ones you love!

Gerald Lee Pearson, known by his friends and family as &#8220;Jerry,&#8221; passed away peacefully in his sleep on January 24, 2022. Jerry, an only child, was born in Leadville, Colorado on April 6, 1933 to Oscar Alder Pearson and Delia... View Obituary & Service Information

The family of Gerald "Jerry" Lee Pearson created this Life Tributes page to make it easy to share your memories.

Gerald Lee Pearson, known by his friends and family as “Jerry,”...

Send flowers to the Pearson family.