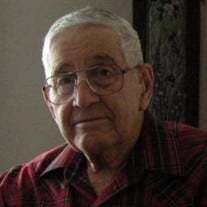 Gerald Emery Holden died February 4th, 2021, at his daughter’s residence in Alamosa, CO. He was 96 years old. Viewing will be held on Friday, February 12th, 2021, from 6 p.m. to 7 p.m. at Taylor Funeral Service Chapel in Delta. A graveside service will be held on Saturday, February 13th, 2021, at 2 p.m. at the Delta City Cemetery in Delta, CO. Gerald was born October 30th, 1924, to Myrtle Bell (Bailey) and C.C. Holden on Ash Mesa, CO. He received his education from Highland School and graduated from Olathe High School. He was a life-long resident of Colorado. February 23rd, 1945, Gerald enlisted in the Navy serving in WWII and was honorably discharged in 1946, as Seaman 1st Class. November 23rd, 1947, Gerald married, as he put it, the best decision of his life, Jean Lorraine Serfoss. They celebrated 73 years together. Gerald loved his family and took the responsibility of family very serious. He worked very hard at his chosen occupation of farming. He worked with irrigated crops, dairy, hog operation and feed lot. After retiring from farming, he took up wood working and traveling the USA with Jean. He always had to be doing something and he was a good neighbor. He is survived by, his wife Jean Lorraine (Serfoss) Holden; son John M. Holden (Deb) of Olathe, CO; daughter Annette H. Mathis (Robert) of Alamosa, CO; four grandchildren, Travis Mathis (Erica), Candice Russell (Lance), Jodi Schneider (Sam) and Jeanie Gilder (Josh) and seven great- grandchildren. He was preceded in death by his parents Myrtle Bell (Bailey) and C.C. Holden, brothers- Earl, Harold and Clarence Holden, sisters-Elaine Young, Nelda Hughes and Lucille Ensign. Memorial contributions may be sent to: Hope West.

The family of Gerald Emery Holden created this Life Tributes page to make it easy to share your memories.

Send flowers to the Holden family.