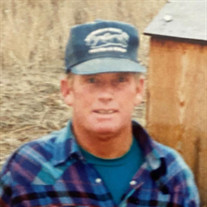 Gary Lee McCracken of Olathe, CO, passed away at his home on October 9th. He was 73 years old. Gary was born ninth out of twelve children to John Theodore McCracken and Alma Lois McCracken on April 27, 1948 at the family home in Olathe, CO. He graduated from Olathe High School in 1966. Gary married the love of his life, Mary Kathryn “Kathy” Lane on November 30th, 1968. They were married for 41 years and she proceeded him in death in 2010. They enjoyed their life together. We have wonderful memories of the two of them farming and gardening together, raising various animals, loving on their grandkids, and hearing about their gambling trips. To this union, three children were born. Gary enjoyed farming and was very successful. He remained in Olathe and enjoyed raising and selling hay. He was known for having the best hay around, even after being told that he couldn’t do it in this adobe dirt. He also raised onions, broccoli, corn, beans and oats. He loved spending time with his family. He had several close friends who he enjoyed talking to daily or having coffee or a meal with. Gary also made sure that he had time to go gambling. Gary is survived by his children: Michael McCracken (Lhaney) of Montrose, CO; Shauna DeVincentis (Eric) of Olathe, CO; and Scott McCracken (Joy) of Montrose, CO; seven grandchildren: Brandon (Bridget) and Zane McCracken, Laney and Jeremy Pierce, Lakota (Sara), Paige, and Maryellen McCracken; five great-grandchildren: Raegan, Judah, and Forest McCracken of Montrose, CO; and Luke and Isaac McCracken of Eckert, CO; two sisters: Marg Jackson and Sandra Lugard (Larry); two brothers: Kenny McCracken (Charleen) and Doug McCracken (Nina) as well as three sisters-in-law: Betty Carey, Minnie McCracken and Debbie McCracken Gary was preceded in death by his parents, Ted and Lois McCracken; his wife, Kathy; three brothers: John McCracken, Alfred McCracken and Lonnie McCracken; four sisters: Lucile Long (Roy), Merrill Morris (Bob), Nora Lindsay (Bill) and Linda Green and brother-in-law, Ron Jackson.

Gary Lee McCracken of Olathe, CO, passed away at his home on October 9th. He was 73 years old. Gary was born ninth out of twelve children to John Theodore McCracken and Alma Lois McCracken on April 27, 1948 at the family home in... View Obituary & Service Information

The family of Gary Lee McCracken created this Life Tributes page to make it easy to share your memories.

Gary Lee McCracken of Olathe, CO, passed away at his home on...

Send flowers to the McCracken family.