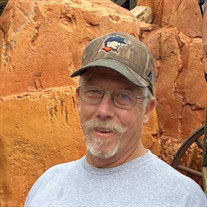 Frank Stephen Eyre passed away Sunday, May 1st, 2022, at his residence in Cedaredge, Colorado. He was 63 years old. Frank was born on March 4, 1959, to Shirly Mae (Lloyd) and Arthur Earl Eyre in Denver, Colorado. Frank grew up in the Denver area and graduated from Cherry Creek High School in 1977. Frank spent most of his adult life working as a mechanic at Pepsi, Scott’s Liquid Gold and the last 19 ½ years at West Elk Mine in Summerset, CO. Everyone knew Frank as the guy to call when something needed fixed. Even in his time away from work he enjoyed, working with his hands - fixing just about anything, other interests included hunting, fishing, and being outdoors. His most recent adventure was making moonshine. In 1980, he married Traci Miller which resulted in a daughter Tami Kristine Kozlosky. On November 27, 1987, he married the love of his life, Colleen Marie (Ferguson), which produced a son, Joshua John. Frank and Colleen spent 34 years together sharing many adventures. Their latest adventure was a trip to Walt Disney World with Josh and his husband Kirk. Family was very important to Frank. Unless it was hunting season! Frank was a quiet man until he got to know you and then you were a friend for life. Many weekends were spent in his barn with family and friends sharing beer and his latest moonshine products. He was always willing to lend a hand. His nieces and nephew considered him the quintessential “Marlboro Man”, even though he quit smoking in 2000, with an “excruciating handshake.” Frank is proceeded in death by both of his parents; two brothers: Mike and Earl; father-in-law: Harlan Ferguson; and brother-in-law: Curt Ferguson. He is survived by the love of his life, wife Colleen; Son Joshua John (Kirk Merryman); daughter Tami K; one sister Sherry (Dr. Clark Bernie); and two grandson’s Mason and Weston. Along with many cousins, many nieces, nephews and great nieces and great nephews. Celebration of life will be held on May 14, 2022 @ The Stolte Shed in Cedaredge, 12:30-4:30 p.m. In lieu of flowers or if you would like to contribute, donations can be made via Venmo @FrankEyreFund. Arrangements are under the care and direction of Taylor Funeral Service and Crematory. View the internet obituary and sign the online guest registry at: www.taylorfuneralservice.com

Frank Stephen Eyre passed away Sunday, May 1st, 2022, at his residence in Cedaredge, Colorado. He was 63 years old. Frank was born on March 4, 1959, to Shirly Mae (Lloyd) and Arthur Earl Eyre in Denver, Colorado. Frank grew up in the Denver... View Obituary & Service Information

The family of Frank Stephen Eyre created this Life Tributes page to make it easy to share your memories.

Send flowers to the Eyre family.