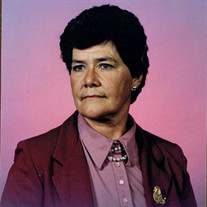 Ethel Arlene Taylor (Goin) Brewer 86, peacefully danced from our arms to the Lord&#8217;s arms at her home in Cedaredge, CO, on February 17, 2021. Ethel was born August 20, 1934, at the family farm in Seibert, CO to Charles Henry Taylor and... View Obituary & Service Information

The family of Ethel Arlene Brewer created this Life Tributes page to make it easy to share your memories.

Send flowers to the Brewer family.