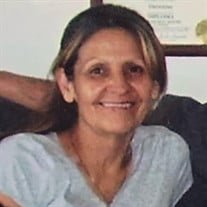 Erma G. Montoya passed away Saturday, May 22nd, 2021, at her residence in Delta, Colorado. She was 69 years old. Rosary will be held at Taylor Funeral Service’s Chapel on Tuesday, May 25th, 2021, at 6:00 p.m. Mass will be Wednesday, May 26th, 2021, at 10:00 a.m. at Saint Michaels Catholic Church, 628 Meeker Street, Delta, Colorado. Inurnment will follow at Mesa View Cemetery. Erma G. Montoya was born On September 20th, 1951, to Mabel (Martinez) and Jack Sherwood in Cordova, New Mexico. She had seven brothers and five sisters. Erma spent her childhood and grew up in Chimayo, New Mexico. She married the love of her life, Charles A. Montoya Sr., September 22nd, 1973, in Chimayo, New Mexico, and shortly after moved to Paonia, Colorado. They found their way to Delta and made it their home in 1983. They had one son and three daughters. She was a hard worker and worked hard at taking care of family! She enjoyed fishing, camping and her home canned goods! She loved her children very much! She was a member of Saint Michael’s Catholic Church. Erma is survived by her husband Charles A. Montoya Sr., her son Charles A. Montoya Jr. (Brandy) of Delta; her daughters Karen Sherwood of Grand Junction, Juanita Salazar (Jesse) of Orem, UT, and Charlene Montoya of Grand Junction; her brothers Carlos, Albert, Wayne and Samuel Sherwood in Chimayo, NM; her sisters Judy, Patty of Chimayo, NM, Corine of LA Puebla, NM, Debbie of Alcalda, NM, and Della Sherwood of Espanola, NM.; her 12 grandchildren and seven great-grandchildren. She is preceded in death by her parents and three brothers Gilbert, Dennis and Leroy Sherwood. Arrangements are under the care and direction of Taylor Funeral Service and Crematory. View the internet obituary and sign the online guest registry at taylorfuneralservice.com

The family of Erma G Montoya created this Life Tributes page to make it easy to share your memories.

Send flowers to the Montoya family.