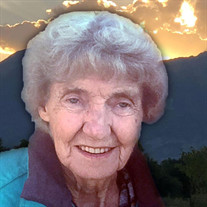 Elizabeth Olsen was born Aug 29, 1932 in Cortez, Colorado, to parents Dwight and Mildred Brown. She helped at the family newspaper as a child, living the small-town life during the Great Depression and World War II. As a teenager, she worked at Mesa Verde National Park during the summers. As a child, she would sometimes travel with her father, a newspaper publisher, around Colorado while meeting a variety of interesting and prominent people of the time. One night they drove to Durango with Red Nichols and the Five Pennies, a famous American jazz band or the era. Other times they traveled around the San Juan Mountains in “the Galloping Goose,” a legendary wartime commuter train that used a big Buick Sedan as a locomotive for its one passenger rail car. Elizabeth studied at Western State College in Gunnison for a year and later moved to Denver and met Robert Olsen, a young farmer whom she married in 1953. The couple had seven children — Don, Patrick, Glenn, Jim, Ken, Chris and Lynda (Cannon). They farmed and ranched on the old Olsen family homestead in Littleton, Colorado, until 1973, then moved to the Western Slope where they operated the Fire Mountain Angus Ranch in the North Fork Valley, raising registered Angus cattle for 45 years. They were longtime and honored members of the Colorado Angus Association. Besides raising seven children, Elizabeth helped with the cattle and ranching operations. She also raised a large garden and she canned food for the winters. She was also considered a mom to the many cats and kittens who made the ranch their home over the years. Elizabeth is survived by her brother, Russ, who lives in Farmington, New Mexico, and she was preceded in death by her husband Robert, who pass in 2013. Graveside services will be held on 1:00pm, Friday, November 27, 2020 at the Riverside Cemetery in Hotchkiss, CO with the Rev. Fr. Wojciech Pelczarski officiating. In lieu of flowers, please make a donation to Hope West, the local hospice that serves residents of Western Colorado. Send donations to Hope West Hospice, P.O. Box 24, Delta, CO 81416 Arrangements are under the care and direction of Taylor Funeral Service and Crematory. View the internet obituary and sign the online guest registry at taylorfuneralservice.com

Elizabeth Olsen was born Aug 29, 1932 in Cortez, Colorado, to parents Dwight and Mildred Brown. She helped at the family newspaper as a child, living the small-town life during the Great Depression and World War II. As a teenager, she worked... View Obituary & Service Information

The family of Elizabeth Olsen created this Life Tributes page to make it easy to share your memories.

Send flowers to the Olsen family.