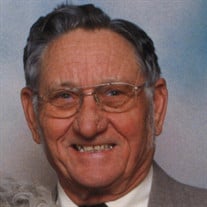 Eldon R. Reynolds April 6, 1932 ~ February 21, 2021 Delta, Colorado resident, Eldon R. Reynolds, passed away on Sunday, February 21, 2021 at HopeWest Hospice Care Center in Grand Junction. He was 88 years of age. A Celebration of Life service will be held at 11:00 a.m., Saturday, February 27, 2021 at Redeemer Lutheran Church in Delta with Pastor Kurt Van Fossan officiating. Inurnment will take place at a later date in Delta City Cemetery. Eldon, a twin, was born on April 6, 1932 to Clara Lillian (Whitehead) and Charles Lloyd Reynolds in Lamar, Colorado. He spent his childhood in Bristol, Colorado and graduated from Grenada Union High School in 1950. After graduation, Eldon attended Colorado A & M where he was a member of Farm House Fraternity receiving his Bachelor’s Degree in 1955. Eldon served his country in the United States Army as First Lieutenant from 1955 until 1957. Eldon then attended Colorado State University receiving his Master’s Degree in Education in 1970. On June 14, 1959, Eldon married Cornelia Wood in Denver, Colorado. They resided in Fowler, moving to Delta in 1970. Eldon was a vocational education teacher in Fowler and a CSU extension agent in Delta. He was a member of Redeemer Lutheran Church in Delta where he served many positions including The Lutheran Hour Ministry. He enjoyed agriculture and farming. Eldon is survived by his wife, Cornelia Reynolds of Delta; his son, Keith (Teresa) Reynolds of Cortez; two daughters: Diana (Tom) Bargsten and Deborah (David) Atchley, all of Grand Junction; nine grandchildren and five great-grandchildren with one on the way. Eldon was preceded in death by his parents and his ten siblings. The family suggests memorial contributions to be made in Eldon’s memory to Tiny Treasures Preschool, c/o Redeemer Lutheran Church, 1000 Pioneer Road, Delta, Colorado 81416. Arrangements are under the care and direction of Taylor Funeral Service and Crematory. View the internet obituary and sign the online guest registry at taylorfuneralservice.com

The family of Eldon R. Reynolds created this Life Tributes page to make it easy to share your memories.

Send flowers to the Reynolds family.