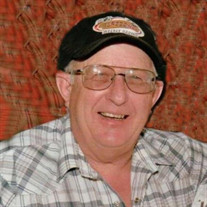 Clifford Burton Cooper passed away Thursday, February 10th, 2022 at his residence in Delta, Colorado after a hard-fought battle with cancer. He was 78 years old. Cliff was born February 6th, 1944, to Mamie Estelle (Stanly) and Lewis Francis Cooper in Oto, Iowa. Cliff would go on to graduate high school in Bruce, Wisconsin in 1962, and Vocational School in Eau Claire, Wisconsin in 1963. He proudly served his county by serving in the United States Air Force. Cliff found the love of his life, Mary Kay (Hendricks), and married her in Stone Lake, Wisconsin on December 7th, 1974. Cliff and Mary moved their family to Delta, CO in 1989, where they owned and operated the Napa Auto Parts store for many years until they retired from the day-to-day operations. Cliff enjoyed the outdoors, as an avid hunter and fisherman. He could be found nearly every weekend at the race track enjoying his stock car or telling stories. Cliff enjoyed tinkering in his shop, but most of all spending time with his family and spoiling (loving) his grandkids. Cliff was a quiet, humble man that loved his family. He exemplified the qualities of a husband, father, and grandfather though his lifetime. Cliff is survived by his loving wife Mary Cooper; three daughters, Sarah (David) Triantos of Delta, CO, Bobbi (Leon) Hanhardt of Durango, CO, and Julie (Todd) Boyd, of Delta, CO; four brothers, Joe Cooper-MN, Pete Cooper-WI, Lynn Cooper-WI; Steven Cooper-AZ; three sisters, Ruth Ann Cooper-MN, Grace Sligar-KS, and Deborah Mikula-WI; and four grandchildren, Cooper & Kaydence Hanhardt, Porsche Triantos, and Lyman Boyd. Cliff was preceded in death by his parents. At Cliffs request, there will be no services. Arrangements are under the care and direction of Taylor Funeral Service and Crematory. View the internet obituary and sign the online guest registry at taylorfuneralservice.com

Clifford Burton Cooper passed away Thursday, February 10th, 2022 at his residence in Delta, Colorado after a hard-fought battle with cancer. He was 78 years old. Cliff was born February 6th, 1944, to Mamie Estelle (Stanly) and Lewis... View Obituary & Service Information

The family of Clifford Burton Cooper created this Life Tributes page to make it easy to share your memories.

Send flowers to the Cooper family.