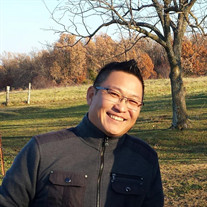 Christopher Johnston was the kind of guy who would dress up in an inflatable T-Rex costume on a random day in March just for fun. He wore it on New Year's Eve, for Halloween. He even wore it to a costume contest at a bowling alley -- and won. Chris, known to friends as Mathias, loved to make people happy, whether he was posting videos of himself dancing around in a dinosaur suit or fixing their cars or driving them to the airport at 4 in the morning. He was unbelievably kind, genuine, generous, and gentle. Children adored him. He accepted people without judgment and greeted friends of friends not with a handshake but a hug. And he could eat almost anyone under the table. Chris, 41, who lived in Springfield, Mo., died Oct. 9 in a motorcycle accident in the Ozarks. Born Choi Boo Nam in Korea, Chris was the beloved son of Rita Murphy and the late David Johnston of Paonia, cherished brother of Thomas, Katie, and Don, and devoted father of Maleyah. He loved being with family, and the friends who became family. And Chris made friends wherever he went. While working on a rafting crew with Donald in Morocco, he spent 10 days alone, driving a truck on windy mountain roads through a country where he didn't speak the language and knew no one. By the end, Chris had befriended a group of locals who called him Jackie Chan and let him stay at their house. Chris loved riding his motorcycle on beautiful days and fishing and playing softball. He was a star athlete in high school, and was part of the legendary Paonia High School baseball team that won the state tournament three years in a row. Chris made a few attempts at school before settling down and getting his associate's degree in business, with honors, last year, sometimes doing homework side by side with Maleyah. He was good with his hands and had a knack for repairing cars and electronics. Above all else, he loved his daughter. They went out for Korean food and blasted music on car rides to nowhere in particular. Chris hosted Friday movie nights for Maleyah's friends, complete with snacks and blankets -- and Chris watching alongside them. He was everyone's second dad. He was everyone's favorite, period. Rest in peace, sweet brother, son, father, friend, and uncle. You were dearly loved and will be deeply missed. Donations in Chris's name can be made to the Paonia High School Memorial Fund baseball program, 846 Grand Ave., Paonia, Colo. 81428. Graveside funeral services will be held at 2:00 p.m., Saturday, October 17, 2020 at Cedar Hill Cemetery in Paonia, Colorado. Arrangements are under the care and direction of Taylor Funeral Service and Crematory. View the internet obituary and sign the online guest registry at taylorfuneralservice.com

Christopher Johnston was the kind of guy who would dress up in an inflatable T-Rex costume on a random day in March just for fun. He wore it on New Year's Eve, for Halloween. He even wore it to a costume contest at a bowling alley -- and... View Obituary & Service Information

The family of Christopher B. "Mathias" Johnston created this Life Tributes page to make it easy to share your memories.

Christopher Johnston was the kind of guy who would dress up in...

Send flowers to the Johnston family.