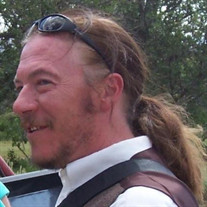 CHRISTOHER (Chris) HENSHALL would have turned 50 in September. Chris was born September 13, 1971, in Ft Collins, Colorado. He lived in Ft Collins and Denver until he was four at which time the family moved to Grand Junction, Colorado. Chris was the only child born to Tom and Claudia Henshall. Chris loved animals of all kinds. He had a ferret named Rickie. He had a rabbit named Cathy Cantaloupe, and gerbils, G.B and Jessabelle (and a lot of offspring), a dog named Sneakers, due to the four white paws. He wrote a book, with pictures, in the fifth grade about Sneakers. Growing up, the family spent most weekends at property they had on the Grand Mesa. Chris would spend hours hiking around or fishing in the small creek. Chris could go out in the evening and visit with the deer and get quite close to them. Chris attended Fruita Middle School and High School, graduating in 1990. Upon graduation from High School, Chris was accepted to The University of Colorado. Chris graduated CU with a B.A., In Fine Arts. After graduation, Chris elected to stay in Denver, and he lived on Capitol Hill for 10 years before moving back to the Western Slope. By then the folks had retired and moved to Paonia Colorado. They had built a new house on a property that had a small but cute cabin. Chris lived in the cabin and normally shared the dinner meal with his folks. Chris was a meat cutter, a trade he learned while working in Denver. He worked for the small local grocery as the meat cutter, and was loved by many of the clientele. In 2009 Chris purchase a small house in Hotchkiss, Colorado. Just nine miles down the road from Paonia. He loved his freedom, and continued with his love for animals. At his passing, he had a Chocolate Lab named Coal. Also, a cat named Jericho that he found at the dump as an abandon five week old kitten. Chris continued working as a meat cutter for a local packing plant. Wherever Chris went and whatever he did, people loved him. Chris is survived by two Uncles, John Henshall (Barbara), and Jim Stephenson (Susan), and numerous cousins. He was proceeded in death by an Uncle, James Henshall (Barbara), and the Henshall and Stephenson Grand Parents. A memorial service of remembrance will be held 10:00 AM, Saturday, July 17th, at Paonia United Methodist Church. In Chris’s memory, donations can be made to Black Canyon Animal Sanctuary, 42528 Needle Rock Rd., Crawford, CO, 81415. If you don’t do donations, think about going to the church of your choice this Sunday. And by all means, hug your children.

CHRISTOHER (Chris) HENSHALL would have turned 50 in September. Chris was born September 13, 1971, in Ft Collins, Colorado. He lived in Ft Collins and Denver until he was four at which time the family moved to Grand Junction, Colorado.... View Obituary & Service Information

The family of Christopher B. Henshall created this Life Tributes page to make it easy to share your memories.

CHRISTOHER (Chris) HENSHALL would have turned 50 in September....

Send flowers to the Henshall family.