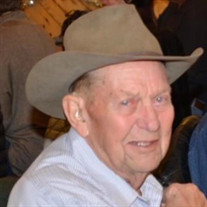 Charles Lewis Nielsen of Delta, passed away peacefully in his sleep during the early morning hours of February 7, 2022. Chuck was born in Cheyenne, Wyoming on December 1, 1935 to Lewis Edward and Jessie Meyers Nielsen. They moved to Fruita, then to the Starr Nelson Ranch outside of Delta and eventually moving to Hotchkiss. He graduated from Hotchkiss High School in 1954. He enlisted in the United States Navy after graduation. During a leave from the Navy, Chuck, as he was known by all, married Betty Marie Bruce. The spent their first year of married life in Hawaii. Together they had 3 children: Kathy, Suzy and Scott. After the Navy, Chuck became a barber and opened Chuck’s Barber shop. During the 1970’s, he went to work at Somerset for United States Steel, he became a mine boss. He worked for them for 20 years. Upon their closing, he eventually re-opened the barber shop and continued to cut hair until his retirement. Chuck loved to fly fish, he spent many hours up Leroux Creek and on Grand Mesa fishing. In addition to being a talented artist, he also spent many hours crafting leather goods. On June 16, 2016, he married Sandra Scott. They shared a love of dancing and spent many weekends going to dances in the surrounding areas. His granddaughter’s were blessed to be able to dance with him at their weddings. Chuck was a storyteller. He loved funny stories and ended up laughing so hard he could hardly finish it, but you ended up laughing too. Those were precious moments for his family and friends. Chuck is survived by his wife, Sandra; his sister, Carole Nielsen Cool of Grand Junction, CO; his daughters: Kathy Brown and husband Brian, and Suzy Conner, all of Amarillo, Texas; his grandchildren, Ronna McAdams and husband Kyle, Lauren Dyess and husband Wesley, Landon Brown, Nielsen and Brysen Conner, all of Amarillo, TX, Erika Nielsen of Tennessee, Tristen Nielsen of Grand Junction, CO, Clayton Nielsen of Carmi, IL, Jessie Pecho of Florida; his great-grandchildren, Hallie Baker and husband Jonathan, Hayden McAdams, Marlee Brooks, Ellie Brooks of Amarillo, Kyer King of Tucson, AZ, Raleigh and Alexander Nielsen of Tennessee; one great-great-granddaughter, Bonnie Baker of Amarillo; his four step children, Steve Scott and wife Sue, James Scott and wife Nancy of Cedaredge, CO, Billy Scott and wife Kim of Salt Lake City, UT, Sandra Rose and husband Todd of Dodge City, KS and many step-grandchildren and great-grandchildren. Chuck was preceded in death by his parents and his son, Scott Erik Nielsen. Graveside funeral services with Military Honors will be held at 3:00 p.m., Wednesday, February 16, 2022 at the Veterans Memorial Cemetery of Western Colorado, 2830 Riverside Parkway, Grand Junction, Colorado. In lieu of flowers, the family suggests memorial contributions to be made in Chuck’s memory to HopeWest Hospice, P.O. Box 24, Delta, Colorado 81416

Charles Lewis Nielsen of Delta, passed away peacefully in his sleep during the early morning hours of February 7, 2022. Chuck was born in Cheyenne, Wyoming on December 1, 1935 to Lewis Edward and Jessie Meyers Nielsen. They moved to Fruita,... View Obituary & Service Information

The family of Charles Lewis "Chuck" Nielsen created this Life Tributes page to make it easy to share your memories.

Charles Lewis Nielsen of Delta, passed away peacefully in his...

Send flowers to the Nielsen family.