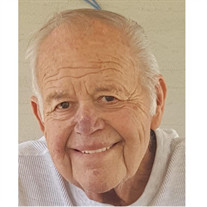 Known by many, loved by all, Burton “Lyn” Moseley, born February 22, 1941, passed away on May 30, 2021. Lyn, as he was known to many was born in Nebraska to Burton K. and Frieda Moseley where they lived and farmed during his childhood. He graduated from Cambridge High School in Cambridge, Nebraska in 1959 and joined the National Guard where enjoyed his time as a Mess Cook and says he peeled a lifetime worth of potatoes. At the age of 18, he began working for the Federal Government in Nebraska and met and married Phyllis They were eventually transferred to Colorado in 1967 and lived in Lakewood. Lyn worked for the Bureau of Mines in Lakewood as a Procurement Supervisor until it closed in 1994. During his time at the Bureau of Mines, he met and cultivated many friendships and was considered a mentor and guidance counselor on top of being a trusted friend. He met and married Virginia “Gini” in 1987 and lived in Morrison at “The Mole Inn”, as they fondly called it, until 1999 when they moved to Cedaredge, CO. In 2003, they built their house along Surface Creek where numerous family and friends have spent time and made great memories. Lyn was an avid volunteer in Cedaredge at Pioneer Town and the beer garden during Apple fest. He was always there to lend a hand to the community and to his wife Gini who passed away in April 2020. For Lyn spending time with friends was of great importance and he formed many friendships during his time in Cedaredge. He enjoyed cribbage, working on cryptogram and crossword puzzles, meeting friends at the Pondy, where he and friends would regularly gather, and riding around in his new golf cart which he lovingly referred to as “Jaws”, complete with a shark decal. He is survived by two sisters and one brother, Mozelle McKenzie of Vienna, Kendall Moseley (Lola) of Bertrand, Dixie Tellus (Chuck) of Holbrook, two daughters, Anita Munkres (Monte) of Highlands Ranch and Sheri Moseley of Lakewood, two stepchildren, Bob Maddox (Linda) of Roxborough, and Shelly Kahler (Steve) of Cascade, four grandchildren Xanna, Jeffrey, Trevor, and Lindsay, and numerous friends who would also call him family. He was a treasured father, brother, grandfather, mentor, and friend who will be greatly missed. A combined celebration of life for Lyn and his wife Gini, will be held later this summer.

The family of Burton "Lyn" Moseley created this Life Tributes page to make it easy to share your memories.

Known by many, loved by all, Burton “Lyn” Moseley, born February...

Send flowers to the Moseley family.