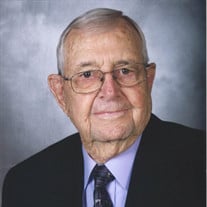 Bernard “Keith” Johnston, age 93, passed away peacefully on Friday, October 16, 2020 at the Colorow Care Center in Olathe. No services are planned for Keith at this time. Inurnment will be at the Veterans Memorial Cemetery of Western Colorado, Grand Junction, CO. Bernard “Keith” Johnston was born in Eckley, Colo. on Nov. 22, 1926 to Thomas Henry and Nellie (Ireland) Johnston. Keith was one of eight children. He spent his childhood and received his education in Eckley, and then went on to attend UNC in Greeley and received his master’s degree in education from CU in Boulder. Keith was a public-school administrator in the area of elementary education. He also served his country in the U S Army. He had only been a resident of Delta for the past seven years, moving to Delta from Cedaredge. He was married to Lillian “Blanche” Crouse and together they had three children. Lillian preceded Keith in death, passing away on August 6,2002, in Fort Collins. On June 3, 2013 Keith married Clarine Niccoli Marshall Raymer in Delta, Colo. His wife Clarine survives. Keith belonged to several educational organizations, and was also a member of the Delta Elks Lodge #1235. He was a golfer, hunter, fisherman, and enjoyed playing bridge, horseshoes, and checkers. Survivors in addition to his wife Clarine include a son, Lyle Johnston (Victoria) of Santa Rosa, Calif. and two daughters: Jana Kennedy of Eloy, AZ and Judith Fowler of Terrell, TX. Three Step Children: Paulette Hamilton (Bob), Bob Marshall (Tina); Jacque Sego Keith leaves 5 grandchildren and 6 great grandchildren and numerous step grandchildren and step great grandchildren. His parents, 4 sisters and 3 brothers, and step daughter Cindy Marshall preceded him in death. Memorial contributions may be made to HopeWest Hospice P. O. Box 24, Delta, CO 81416. Arrangements are under the care and direction of Taylor Funeral Service and Crematory. View the internet obituary and sign the online guest registry at taylorfuneralservice.com.

Bernard &#8220;Keith&#8221; Johnston, age 93, passed away peacefully on Friday, October 16, 2020 at the Colorow Care Center in Olathe. No services are planned for Keith at this time. Inurnment will be at the Veterans Memorial Cemetery... View Obituary & Service Information

The family of Bernard "Keith" Johnston created this Life Tributes page to make it easy to share your memories.

Send flowers to the Johnston family.