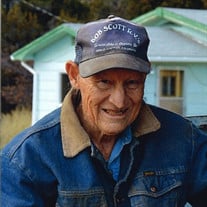 Arnold Jesse Hood passed away on August 5th, 2021, at the Community Life Center at the VA Hospital in Grand Junction, CO. He was 86 years old. Services will be held at Taylor Funeral Service’s Chapel in Delta, CO at 682 1725 Road at 2:00 p.m. Saturday, August 14th, 2021. Inurnment will be held at a later date in Cedaredge, CO. Arnold was born on July 5th, 1935 to Jesse A and Abby May (McDermott) Hood in Cedaredge, CO. He was a true, lifetime member of the Cedaredge area and knew so much of the history of Delta County. Arnold graduated from Cedaredge High School in 1953. He married the love of his life Audrey Mae (Spaulding) Hood in Cedaredge, CO, on April 1st, 1957. They spent 57 years together. Arnold served our country in the U.S. Army, assigned to Field Artillery Battalions 802nd and 538th in Germany during the Korean War. He was an active member of the VFW Post #9221, as well as a member of the NRA. He was a man of many trades, masonry, carpentry, & logger, including owning and operating his own sawmill. He enjoyed working with his hands and utilizing tools in his work and hobbies of woodworking and leather work. He was also fascinated with geology. Arnold is survived by his son Roy A. Hood of Alamosa, CO; his daughter Donna J. (Bill) Faller of Grand Junction, CO; four grandchildren, Kurt (Sadie,) Faller, Joe (Kandi,) Faller, Rob (Nikki,) Faller, Tina (Will,) Germain, all from the Grand Junction area. He is also survived by three brothers, Earl (Marjorie) Hood of Fruita, CO; Dale (Loretta) Hood of Parkton, NC; Milton Hood of Cedaredge, CO; Sisters, Arline Fowler of Cedaredge, CO; and Myrna Lampton, of GA, eight great-grandchildren and numerous nephews and nieces. Arnold was preceded in death by his wife Audrey, his parents and one sister, Iva Campbell. Arrangements are under the care and direction of Taylor Funeral Service and Crematory. View the internet obituary and sign the online guest registry at www.taylorfuneralservice.com

Arnold Jesse Hood passed away on August 5th, 2021, at the Community Life Center at the VA Hospital in Grand Junction, CO. He was 86 years old. Services will be held at Taylor Funeral Service&#8217;s Chapel in Delta, CO at 682 1725... View Obituary & Service Information

The family of Arnold Jesse Hood created this Life Tributes page to make it easy to share your memories.

Arnold Jesse Hood passed away on August 5th, 2021, at the Community...

Send flowers to the Hood family.