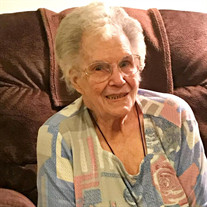 Not sure what to send?

Anna May Miller passed away on Monday, May 9, 2022, at the HopeWest Care Center in Grand Junction, Colorado. She was 98 years old. Funeral services will be held at noon on Monday, May 16, 2022, at the Taylor Funeral Service Chapel in Delta, Colorado, with Deacon Price Hatcher officiating. Burial will follow at the Delta City Cemetery. Anna May Delmotte was born in Halfway, Michigan on February 27, 1924, to Adolph and Hazel (Bellor) Delmotte. At a young age, Anna went to live with her grandparents and help them in their restaurant. On May 8, 1943, Ann married the love of her life Alton August Miller in Mt. Clements, Michigan. To this union five children were born. Al passed away on October 4, 1996 in Delta, CO. Ann resided in Cedaredge Colorado from 1990 to 1992 and then Delta, Colorado since 1992, coming from Mancelona, Michigan. She was a member of Saint Michael’s Catholic Church in Delta, Colorado. She was also a member of the pinochle club and scrabble club that met at the Bill Heddles Recreation Center in Delta. Ann enjoyed knitting, crocheting, crafts, sewing, jigsaw and crossword puzzles, playing cards, traveling and gambling. What she enjoyed the most was spending time with her children and grandchildren, cooking them their favorite meals. She is survived by four daughters: Sharon and David Brooks of Bellaire, Michigan; Patricia Miller of Republic Michigan; Marie and John Kozma of Mesquite, Nevada; Margaret “Marge” and Chalmer Swain of Delta, Colorado; a son: David and Sheryl Miller of Mancelona, Michigan; two brothers: Joe and Barbara Delmotte of West Branch, Michigan and Maurice “Butch” and Renee Delmotte of Broomfield, Colorado; a sister: Darlene Fisher of Hillman, Michigan. She is also survived by nine grandchildren: Diane and Don Kiessel, Deborah Ryder, Patricia and Scott Spires, Rebecca and Rod Ridgeway, Michael Ryder, David Brooks Jr., Heather and David Dozier, Matthew Swain and Amber Swain; 13 great grandchildren; and eight great~great grandchildren. Ann was preceded in death by her parents, husband Al, a brother Adolph and 2 sisters, Mary and Gladys. Memorial contributions in lieu of flowers may be made to HopeWest Hospice P.O. Box 24, Delta, Colorado 81416 Arrangements are under the care and direction of Taylor Funeral Service and Crematory. View the internet obituary and sign the online guest registry at: www.taylorfuneralservice.com

Anna May Miller passed away on Monday, May 9, 2022, at the HopeWest Care Center in Grand Junction, Colorado. She was 98 years old. Funeral services will be held at noon on Monday, May 16, 2022, at the Taylor Funeral Service Chapel in... View Obituary & Service Information

The family of Anna May Miller created this Life Tributes page to make it easy to share your memories.

Send flowers to the Miller family.