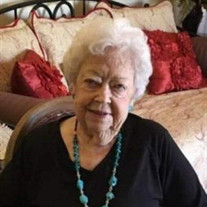 Anna Lou Priestley Waterman peacefully passed away June 26, 2020 at the Timbers in Edmond, Oklahoma. She was 95 years old. Her interment will be Friday, July 3, 2020, at 11:00 a.m., in the Norwood Cemetery, Norwood, Colorado. She was born on November 30, 1924 to Frank D. and Electa (Shepherd) Wilson in Nucla, Colorado, the second of four children. She attended school in Nucla and graduated from Nucla High School in the class of 1943. Anna Lou married S. Ward Priestley on June 10, 1943 and they made their home in the Westend of Montrose County. To this union two children were born: Sherry Rae and Harold Frank (Butch). After the death of her husband Ward on May 29, 1972 she moved to Houston, Texas and lived with her sister Betty and her family while she attended cosmetology school. Finishing her degree she returned to Colorado and worked for a number of years in the cosmetology field and made her home in Redvale. Anna Lou married again on January 30, 1982 to Albert Clark Waterman. Clark passed away on March 30, 1991. At the passing of her sister Betty’s husband (John) she and Betty lived together in Grand Junction, Colorado. When Betty died Anna Lou’s health prevented her from living on her own and in 2012 she moved to Edmond, Oklahoma where she lived until her death. She is survived by her children and their spouses: Sherry and Gary Sump of Edmond, Oklahoma and Harold (Butch) and Drue Priestley of Redvale, Colorado. Grandchildren and their spouses: Ward and Heather Priestley of Redvale, Colorado, Nicole and Hugh Crethar of Edmond, Oklahoma, Aaron and Ginger Priestley of Grand Junction, Colorado, Jennifer and Ray Phillips of Luther, Oklahoma, Steven and Sammie Sump of Noble, Oklahoma, and Adam and Hilary Priestley of Mancos,, Colorado. Great grandchildren Taylor (Kaitlyn) and Kristin Farris, Jacob, Jackson, Dottie Mae, Nellie, George and Sherry Anna Phillips, Meagan (Troy) Kite, Octavia ( Tyler) Steadham, Cidney Priestley, Andrew, Lucas, Peyton, and Olivia Priestley, Levi, Tymbri, and Caprise Priestley, Chloe, Mary, Caitlyn, Kaleb, and Patrick Sump. Great great grandchildren Bradley Farris, Kinsley, Gracie, and Kennedy Rose Kite, a brother, Wayne Wilson of Redvale, a sister-in-law Doris Wilson of North Carolina, and many nieces and nephews. Preceding her in death were her husbands Ward Priestley and Clark Waterman, her parents, Frank and Electa Wilson, her brother Ray Wilson, a sister and her husband Betty and John Irons, and sister-in-law Arlene Wilson. Anna Lou was a member of The Church of Jesus Christ of Latter Day Saints, and the Ute Trail Study Club. She loved living in the beauty of Western Colorado.

Anna Lou Priestley Waterman peacefully passed away June 26, 2020 at the Timbers in Edmond, Oklahoma. She was 95 years old. Her interment will be Friday, July 3, 2020, at 11:00 a.m., in the Norwood Cemetery, Norwood, Colorado. She was born... View Obituary & Service Information

The family of Anna Lou Priestley Waterman created this Life Tributes page to make it easy to share your memories.

Send flowers to the Waterman family.